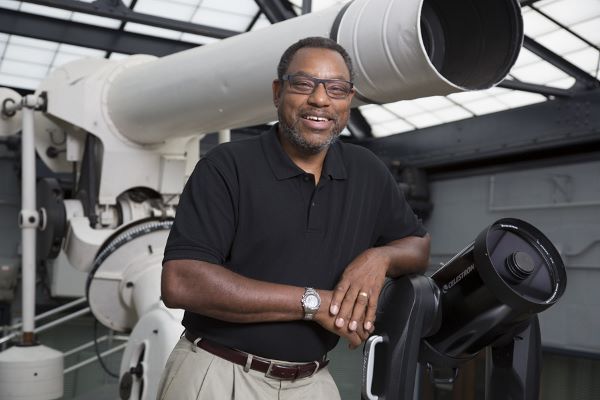 Join us as we celebrate our legacy in honoring Derrick Pitts as our 128th Explorer, with a reception, presentation, and (optional) dinner, at the Union League of Philadelphia.

Derrick will help us understand our world with his special presentation, ‘Next’, that explores the intersection of imagination, innovation, discovery; their impact on space exploration, and our expanding understanding of the universe.

Astronomer Derrick Pitts has been associated with The Franklin Institute since 1978, designing and presenting many of the museum’s public programs and exhibits. A NASA Solar System Ambassador since 2010, he also served as NASA’s first ‘Astrobiology Ambassador’ for the UNCF Special Program Corporation’s Astrobiology Partnership Program and at the invitation of Space Shuttle astronauts, has flown items of his own creation on two different flights. Pitts appears regularly as a science content expert for most national and international media outlets, including PBS, BBC, Discovery, Science, and Curiosity Stream. He has received numerous awards including honorary degrees from LaSalle University, Rowan University and Wagner Free Institute. Pitts and his wife Linda love to travel, especially through California’s Napa Valley wine region. His twitter handle is @CoolAstronomer and his motto is ‘Eat, breathe, do science. Sleep later.’

Mr. Pitts, a Philadelphian, embodies the spirit of discovery and exploration that has long sustained the Geographical Society of Philadelphia and it is in his honor that we themed our 2018/2019 season, The World Begins in Philadelphia.

For men: Jacket and collared shirt are required at all times. Not Permitted: turtlenecks shirts, collared shirts open more than one button, untucked shirts, jeans, t-shirts, sneakers, and flip-flops.