Since 1891, we have been annually honoring an “Explorer of the Year”.  As our mission is to support the exploration of the world and enhance perspective on the world’s peoples and places, we chose the nominee based on their work crossing boundaries in their own successful and very worthy example of that goal. The special Cecilia Beaux pin has previously been awarded to Robert Peary, Theodore Roosevelt, Neil Armstrong, Diana Nyad, and Derrick Pitts – to name just a few.

See the list below and the legacy of the Society! Between 17 March and 26 May 2021, Leon and his team led an expedition along the full 1900km of the Tigris river, by boat, from its source in southern Turkey, through north-east Syria, and across Iraq to the Persian Gulf.
“Our small team – @abudijlahs and @super.hana in Iraq, @angel.brn6 and @bisaricli21 in Turkey, and Leon McCarron, Emily Garthwaite and @claudio_von_planta- travelled from the snow capped mountains of the source in spring through to 50+ Celsius in the marshes in early summer. The expedition allowed us to hear the stories of the river, as told by those who live on its banks. Our quest was for the enduring aspects of the Tigris – the culture and heritage that have survived for millennia – but also to see clearly the impact of past decades of conflict, and the environmental and geopolitical threats that are so present in the region.
There’s no doubt in my mind that it was the hardest journey I have ever made. The logistics alone took 18 months to arrange. The 70 days on the river were long, grueling and complicated…but also an incredible privilege. The Tigris river fed some of the earliest civilisations on earth, and many of the major centres of power and influence of old are still important today: Diyarbakir, Mosul, Tikrit, Samarra, Baghdad, Kut, Amara, Basra.
It’s been very hard to keep this under wraps for a year already, but now we’re finally ready to begin to share it. I have written a book, due for publication early next year. Emily has created an incredible body of photographic work along the river. Claudio Von Planta filmed the entire journey. We partnered with the Iraqi environmental NGO @humatdijlah to highlight the challenges facing the river. I’m incredibly proud of our team for pulling this off. It was a mammoth effort, and I’ll share details on those involved on the ground and remotely in due course. With special thanks to the Amersi Foundation and @abrahampath for their support, and to @waterkeepers.iq.ku, @leicauk @mhmdsarai, @mark_stothert, @ali_alkarkhi, @iq_ameer_, @salimrashad, @lawin_mohammad_fares, @ali.almousafery, @samuel_sweeney_, @miran_dizayee” Dr. Pitts is the chief astronomer, planetarium director, and NASA Solar System Ambassador for the Franklin Institute.  Derrick started his education at Germantown Academy before attending St. Lawrence University in NY. He has since been awarded honorary doctorates from La Salle University and Rowan University.  His masterful ability to communicate science to the public has led him to radio – as a weekly contributor to WHYY’s long-standing Skytalk – and television, where he has been a guest on several shows, including The Colbert Report. He has been honored by Mayor Kenney as a “Philadelphia Hero” due to his efforts to expose and educate children about science. Derrick Pitts is a true “Philly Hero” and #coolastronomer, and we are over-the-moon that he spoke with us!

Steve McCurry was catapulted to fame with his iconic photo of the “Afghan Girl” – the young, Peshawari refugee – which first appeared on the cover of National Geographic in 1985.  He achieved unparalleled excellence in photographic journalism, in a career that has spanned decades and crossed borders of some of the most war-torn regions on earth.  Steve was honored at the Union League of Philadelphia on August 29, 2017, with over 350 guests.

Explorer extraordinaire, Erik Weihenmayer, who has been blind since his teenage years, conquered mountains (including all of the Seven Summits!), and so much more.  This accomplished climber, paraglider, skier, and kayaker shared his unique “vision” of the world and his amazing stories of adventure.  Over 400 attended the Free Library of Philadelphia to see Erik honored on February 7, 2016.

In 1915, Theodore Roosevelt spoke to a sold-out audience at the Academy of Music. His talk, The River of Doubt, described his dangerous exploration of the Amazon River. 100 years later, this Annual Dinner continued the legacy by honoring Paul Rosolie for his exploration of the Amazon River. A Brazilian feast was prepared at Chima Restaurant in Philadelphia on November 10, 2015.

Ryan was the first to circumnavigate China on a motorcycle.  He presented four film clips capturing the different regions of China, which were complemented by a delicious course of Chinese cuisine at Jane G’s Restaurant.

Very few chefs worldwide are acclaimed with the title, Iron Chef. The Geographical Society invited guests to wine and dine with Philadelphia’s own Iron Chef, Jose Garces. He selected a five-course feast from his favorite recipes of Ecuador, Peru, Chile, Mexico, Cuba and Spain. The delicious dinner was held at his JG Domestic Restaurant in the Cira Centre Building on September 17, 2013. On January 16, 1913, the three most famous competing polar explorers, Roald Amundsen, Robert E. Peary, and Ernest Shackleton, came together to be honored by the GEO. The historical night was created exactly 100 years later on the same day in the same room at the Bellevue Stratford. While the 1913 menu featured dishes like “clear green turtle in cup and roast guinea fowl in currant jelly,” this grand event’s culinary selection was updated to more contemporary delicacies. Guests enjoyed the daring travel of National Geographic Adventurer Jon Bowermaster’s six-week exploration of the Antarctic Peninsula by sea kayak, sailboat, foot, and plane. They enjoyed his tales and the award-winning film,‘Terra Antarctica,’ documenting the expedition.

Diana Nyad, the Queen of the Oceans, told of her Xtreme Dream – to swim from Cuba to Florida. In the 1970s, Diana set a number of open water records and was the first known woman to circle Manhattan. She has led a dignified career as a sports commentator for ABC’s Wide World of Sports, Fox Sports Television, and as a travel writer for National Public Radio. Guests enjoyed hearing of her attempt at 61 years of age and the special footage captured by CNN. 12th Street Catering prepared a Cuban feast at WVIA stations on November 12, 2011.

Traveling was changed forever and the man who changed it was Arthur Frommer! Guests enjoyed meeting the traveling legend who at 80 years old still is lending the best travel tips in books, blogs, articles, and interviews. His daughter Pauline Frommer joined him as she takes over for her legendary traveling Dad. GEO welcomed this unique father/daughter team for an evening of outspoken and entertaining commentary on travel at Hyatt at Penn’s Landing. 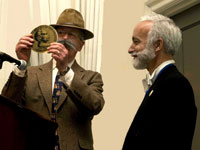 GEO commemorated the dinner hosted 100 years ago to honor Peary for reaching the North Pole on April 6, 1909. It was at the same location, the at Bellevue’s elegant Rose Garden. Michael Robinson, the author of The Coldest Crucible: Arctic Exploration and American Culture, spoke on “Arctic Fever.” We joined celebrity guests at this glacially “cool” event which included selections from the 1909 dinner menu, re-created by the hotel’s executive chef. 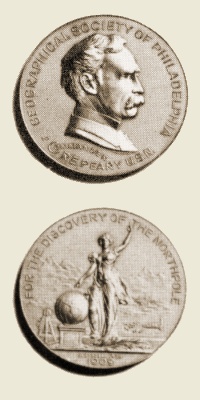 The Geographical Society and its members were strong supporters of Robert E. Peary’s explorations, including the Auxiliary Expedition of 1894 which returned crew members, Mrs. Peary, and her infant daughter to the U.S. Peary was awarded our Elisha Kent Kane gold medal in 1902 and this specially-struck gold medal (right) for his attainment of the North Pole in 1909.

The program included a brief reenactment of the gold medal award ceremony and a speaker on Arctic Fever, then and now. Robert McCracken Peck, Senior Fellow at The Academy of Natural Sciences, impersonated Robert E. Peary. (He is a descendant of attendee James Mapes Dodge.) The current Geographical Society President, G. Theodore Burkett, portrayed Henry Grier Bryant, the President in 1909. The Arctic Fever speaker was Michael F. Robinson, author of The Coldest Crucible: Arctic Exploration and American Culture, winner of the 2008 Prize of the Forum for the History of Science in America. He was available to sign copies of his book.

118th-Tod Carmichael- Alone… At the Bottom of the World

In 1911 two explorers set out to reach the last “unreached” place on earth. With teams of men, dogs, and ponies, Roald Amundsen (Norway) and Robert F. Scott (England) struggled to become the first to arrive at the South Pole – a feat requiring years of preparation and months of exhausting travel.

Todd Carmichael, nearly a century later, set out in November 2008 to become the first American ever to reach the South Pole solo and unassisted, to plant our nation’s flag. There were no support crews, no animals, no machinery, no additional food or supply drops, no one to help – but he used high-tech equipment with capabilities far beyond the dreams of his predecessors. This special night was held at the Union League in March 2008.

In mid-1972, Tony and Maureen Wheeler set out on a year-long trip around the world with the intention of getting the travel bug out of their systems. After following the “hippie trail” from England across Asia to Australia, they recognized the need for a new sort of travel guide to suit the new breed of laid-back, independent travelers. More than 30 years later, they are the owners of one of the world’s largest, most successful, and best-loved independent travel publishing companies. The Wheelers, from Melbourne, Australia, showed favorite images and related their story as told in Unlikely Destinations: The Lonely Planet Story — a lively mix of autobiography, business history, and of course, travel! Honored at the Union League in June 2007. 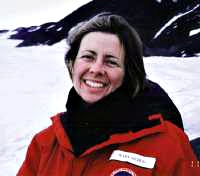 Annual Dinner attendees received a first-hand preview of plans and expectations for the upcoming International Polar Year (IPY) in 2007 – 2008, a two-year initiative by scientists from more than 40 nations. The first IPY in 1882 – 1883 led to major advances in scientific knowledge and geographical exploration, and set a precedent for international scientific cooperation. Dr. Mary Albert identified an important challenge at the May 2006 dinner at the Union League: “The current climate change, so evident in the Arctic, cries out for a large internationally coordinated program of scientific investigations.”