Some of Our Speakers

Kae Lani Palmisano is an Emmy Award-Winning television host, food and travel writer, recipe developer, and home cook who loves to explore the journey that food takes to get to the plate. As an “edutainer” her work focuses on having fun with food while educating audiences about where it comes from and its historical and cultural impact.As the host of WHYY’s Check, Please! Philly, Kae Lani showcases Philadelphia’s favorite restaurants through the eyes of locals, celebrating fine dining establishments alongside hidden neighborhood gems.  From Bucks County to Delaware and the Main Line to South Jersey, Check, Please! Philly is one of the region’s top food programs, earning Kae Lani the 2020 Mid-Atlantic Emmy for Talent: Program Host/Moderator, as well as two other Mid-Atlantic Emmy nominations in the show’s first year. Kae Lani has been featured in the BBC, Salon, on Fox29 Good Day Philadelphia, and has appeared on Gordon Ramsay’s 24 Hours to Hell and Back on FOX.  As a food and travel writer, she has been published in The Philadelphia Inquirer, Food & Wine, USA TODAY, KitchenAid Stories, Roads & Kingdoms, and more.

Derrick Pitts is the chief astronomer, planetarium director, and NASA Solar System Ambassador(!) for the Franklin Institute.  Derrick started his education at Germantown Academy before attending St. Lawrence University in NY. He has since been awarded honorary doctorates from La Salle University and Rowan University.  His masterful ability to communicate science to the public has led him to radio – as a weekly contributor to WHYY’s long-standing Skytalk – and television, where he has been a guest on several shows, including The Colbert Report. He has been honored by Mayor Kenney as a “Philadelphia Hero” due to his efforts to expose and educate children to science. Derrick Pitts is a true “Philly Hero” and #coolastronomer, and we are over-the-moon that he will speak with us!

The Story of Pier 53, aka Washington Avenue Green by the Delaware River

Arriving immigrants first disembarked at Lazaretto Station at Essington for health inspection, then continued up the Delaware River by ship for another eight miles to Pier 53 in South Philadelphia, the final entry point.

Our guest speaker and advisory board member Gabriela Cesarino presented the history of the area and talk about its future.

Susan McAninley who has made it her business to find and preserve stories from the descendants of immigrants who came through Pier 53, told us about the immigrant stories that she has been collecting through the years. 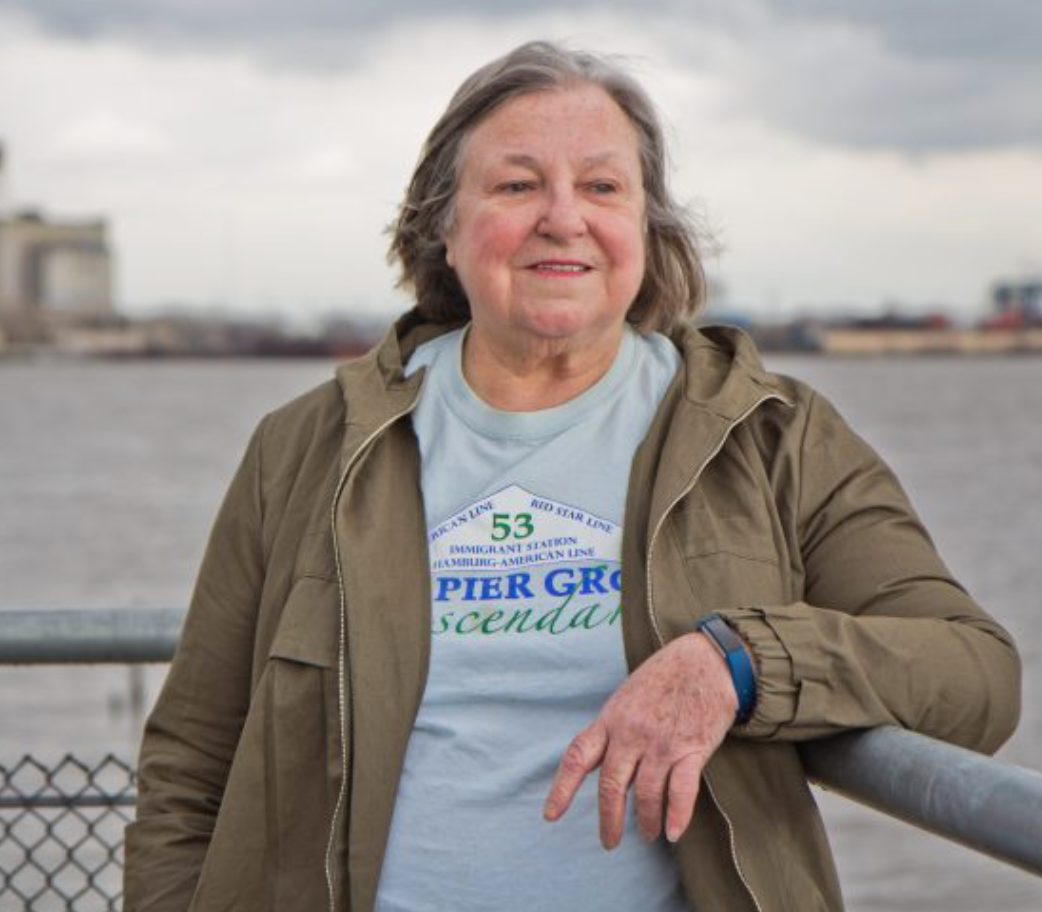 George L. Armistead is all about birds. George is a lifelong birder who enjoys photography, and writing about birds – and has authored 2 books on them! He is based in Philadelphia, holds a masters of environmental studies from the University of Pennsylvania, and is an associate at the Academy of Natural Sciences of Drexel University. He co-founded BirdPhilly to promote interest in Philadelphia’s birds. Since April 2012 he manages events for the American Birding Association.  George spent a decade leading international birding tours to all seven continents for Field Guides Inc., and is currently a Tour Leader for Rockjumper Worldwide Birding Adventures. Isabelle Betancourt is an entomologist, photographer, and science communicator! As a Curatorial Assistant of Entomology at the Academy of Natural Sciences of Drexel University, Isa manages LepNet, a project to digitize over 50,000 North American moth and butterfly specimens in the Academy’s entomology research collection. Since 2013, she has been documenting insect biodiversity in Center City Philadelphia through collecting insects that get trapped in the iconic Swann Fountain. Isa enjoys entomological outreach and shares the world of entomology with a global audience through her weekly live-broadcasts (check out the #bugscope).

Isa has a double major in Entomology and Plant Science from Cornell University and is completing a Communication Masters at Drexel University. Connect with her via Instagram or Twitter: @isabetabug Ryan Pyle is an adventurer and author, BBC Earth TV host and great speaker.  With a degree in International Politics, skills in photography and writing, and an adventurous spirit, Ryan has explored lesser-known parts of the world by motorcycle and brought his vision to audiences around the globe. He has taken his “Extreme Treks” and “Tough Rides” through India, China, and Brazil. We honored Ryan as our 2014/15 Explorer of the Year, and proudly welcome him back. geosocietyphila
•
Follow
GEO presents @LeonMcCarron as its 130th Legacy Event honoree, the Explorer of the Year on June 14th at @pennmuseum. Leon is sharing his journey exclusively with our guests before the release of his book, film, and multimedia site titled, Wounded Tigris: A River Journey Through the Cradle of Civilization, which will be made public in 2023. Highlights of the Evening: · Visit Middle Eastern Galleries with Penn Museum’s docents prior to Leon's presentation. · Listen to the presentation in the Harrison Auditorium followed by a cocktail reception in the Egyptian Gallery. · Meet Leon, who will also sign copies of his previous publication, "The Land Beyond", available for purchase at the event. or Sponsorship opportunities and questions please contact Dilek Karabucak, Executive Director, at geosocphil@gmail.com #tigris #mesopotamia #explorer #walkingtrails #bikelife #riverexpedition #University of Pennsylvania Museum of Archaeology and Anthropology #travelphotography #geosocietyphila
View on Instagram |
1/9 geosocietyphila
•
Follow
Repost from @nbcla • Today is the 160th anniversary of Cinco de Mayo. ⁠ ⁠ In Mexico, #CincodeMayo is not a celebration but a day of remembrance, commemorating Mexico’s victory over the French during the 1862 Battle of Puebla. An outnumbered Mexican army led by Ignacio Zaragoza, a 33-year-old Texan from Goliad, defeated the invading French forces at the small town of Puebla de Los Angeles during the Franco-Mexico War.⁠ ⁠ #history #mexicanhistory #historia
View on Instagram |
2/9 geosocietyphila
•
Follow
Good luck to all participants of the Broad Street Run! @ibxrun10 The 42nd Blue Cross Broad Street Run returns to Philadelphia on Sunday, May 1, 2022. The nation’s largest 10-miler will return to its traditional spring date for the first time since 2019! #philadelphia #broadstreetrun #broadstreet #bluecross
View on Instagram |
3/9 geosocietyphila
•
Follow
Enjoy some outdoor time this weekend! Repost from @discover_phl • Happy #EarthMonth from Philadelphia! 🌎🌳💚 With over 10,000 acres of parks and recreation space, Philadelphia has one of the largest urban parks systems in the nation. #philadelphia #explore #nature #city #travel #places #placestovisit
View on Instagram |
4/9 geosocietyphila
•
Follow
Repost from @jguzmannn • The red textures of the Tatacoa Desert in Colombia 🏜 The Tatacoa is actually a tropical dry forest, not a desert. Its weather conditions and lack of air pollution and human intervention allow for some of the best stargazing in the country and in the world. The Tatacoa desert is located between two mountain ranges which absorb all the moisture in the region and result in such a dry and vegetation free area. Due to its geological conditions, it has also become a place of great Paleontological interest. #explore #nature #travel #desert #mountain #colombia #explorer
View on Instagram |
5/9 geosocietyphila
•
Follow
Today’s history snippet is on the genius Nikola Tesla! 💡 Repost from @npr Homes around the world are powered the way they are because of Nikola Tesla. His one-time boss, Thomas Edison, did everything he could to stop this from happening. Interesting facts: 🔘Tesla was born during a lightning storm and conducted experiments with light later on in his career. 🔘Tesla thought of mobile phone technology and wireless internet way back in 1901. He had imagined transmission of messages wirelessly before anyone did! #explore #history #nikolatesla #inventor
View on Instagram |
7/9 geosocietyphila
•
Follow
Repost from @discovery for #EarthMonth In the last 25 years, we've lost a forest the size of a soccer field every second - worldwide. In Kenya, groups are coming together to combat deforestation, one tree at a time 🌳 Join the movement and get educated on your own carbon footprint: https://www.nature.org/en-us/get-involved/how-to-help/carbon-footprint-calculator/ #earth #discovery #conservation #nature
View on Instagram |
8/9 geosocietyphila
•
Follow
repost from @franklininstitute and narrated by our past Explorer of the Year, Dr. Derrick Pitts, Chief Astronomer 🌎 Happy Earth Day! 🌎 We’re proud to highlight the work that a few of our partners around the city are doing to keep our environment healthy – for ourselves, for other living things, and for our future. Enjoy these messages from Pennsylvania Horticultural Society, Clean Air Council, Schuylkill Center, and Center of Excellence in Environmental Toxicology at the University of Pennsylvania.
View on Instagram |
9/9
View on Instagram
Copyright 2022 Geographical Society of Philadelphia